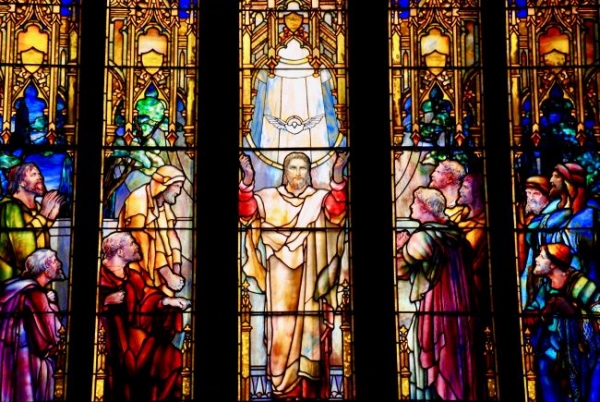 We are blessed to have a striking Tiffany Window prominently positioned above our Altar. An article that originally ran in The Charlotte News in May 1934 tells the story behind the window, and it is even more breathtaking than the artistry itself.

Story of Gift to Episcopal Church of the Holy Comforter is Told for First Time - Rev. R.B. Owens Gives History of Window

It glitters and gleams in the changing light - the most beautiful church window that Tiffany can build. Visitors to the Holy Comforter Episcopal Church here look and marvel - for the experienced eye the window is easily worth a high percent of the value of the church it adorns.

For 17 years, it has hung over the altar and until yesterday its story had not been told. The Reverend Mr. Owens, Rector of the church, was pledged to secrecy until after the death of the donor. He died two years ago but the window had become so accepted that no one thought to ask for the story.

E.A. Smith, who built the Chadwick-Hoskins Cotton Mills here, later moved to Hickory, building the Rodhiss Mill and then again moved back to Charlotte, building other mills, was living in Charlotte at the time the Holy Comforter Episcopal Church was built. With his family he lived on Park Avenue.

Mr. Smith was a generous impulsive man with a wife whom he adored. Although of Episcopalian background he was not at the time a member of any church. However, since his wife was interested in building Holy Comforter, no man worked harder than he did on the project.

In the influenza epidemic of 1919 his wife died. Mr. Smith came to me and expressed his desire to place a memorial over the altar. He wanted something that would spread the spirit of love and comfort over the congregation that his wife's presence had done during her lifetime.

The plan of the window was worked out and we went to New York to Tiffany and Company to have it designed.

Mr. Smith told the man sent to take his order just what he wanted. The man began with the usual. "How much do you wish to spend - for this amount we can give you certain colors. For another amount we can give you another combination." To these suggestions, the reply was. "I did not come here to trade and barter. This window is a memorial to the most precious possession I have ever had. I want the most beautiful window you can build."

Mr. Owens tells that they had a great deal of difficulty in working out the design of the window. As it is completed, however, it is a scene from the Last Supper as Christ was speaking to the disciples. Judas has already left to betray Him - but Christ and the eleven are all pictured in the scene.

The window is divided into five panels. The center panel pictures Christ with outspread hands and in the distance is a white dove. It was explained that the designing of the center panel offered the most difficulty. The dove is the symbol of HOLY COMFORTER and a ritual of the Episcopal Church is that no window shall hang above the altar of a church that does not contain the figure of the Christ; hence, the combination of the two as the central theme of the picture.

A Mr. Wilson was the artist sent to us. We gave him our plan and left the details in his charge.

Later we were notified that the window was finished and we returned to New York to see if it was all that we desired. Tiffany had it on display in their studio and we, even with all our expectations, were awed by the beauty of it.

"Do you like it?" the artist asked. "I myself have only one person in this world to love and that is a daughter who is dying of tuberculosis. When I was told that I was to build a window without regard for price, I resolved that I would design a window which would bring comfort to souls who sat beneath it to worship who might be in need of it even as I."

Even at yesterday's telling of the story, Mr. Owens refused to reveal the exact cost of the window for he said the donor wished it to be appreciated for its beauty and not for the money involved.

The church of the Holy Comforter would like to thank Mr. and Mrs. Chadwick Smith for furnishing us the above article at some point after 1934.

Your annual pledge goes to fund the operating budget of the church which makes it possible to share God’s love through our many ministries. Giving is an act of generosity that multiplies God’s love in the world. When you recognize your blessings, gratitude naturally follows. And generosity becomes an outward expression of your gratitude.